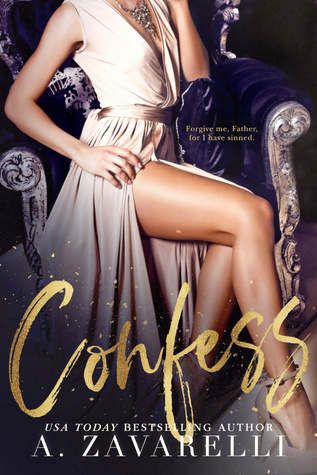 Lucian
A life free from sin.
For seventeen years, I have lived and breathed those words. But there is no balm to the war inside my soul.
Until her.
The mysterious beauty too lethal to taste. She’s a thief, a con, the essence of everything I loathe. Still, she lures me in with her lying eyes.
In the dark of night, she came to confess her sins, and in the light of morning, I plotted to steal her away.
She will be my ruination. My damnation. My biggest regret.
So help me, God.

**
Gypsy
A word of advice? Don’t show me your vulnerabilities because I will find a way to exploit them. I learned the hard way to take what I want from life with no regrets.
Until him.
He’s one of the most hated men in America. A soulless criminal attorney. A recluse. And as of five minutes ago, my new husband.
He wants to keep my secrets and collect my tears, but he should know that a wild animal can’t be domesticated.
I don’t know how to love men. I only know how to leave them.
With everything I want.

I’d been in a mood for contract/forced marriage for some reason. So I was glad to come across this book when I did. The synopsis was interesting too. I wasn’t expecting an extraordinary read. Just something of a time-pass. But I did end up enjoying this read, for the most part.

This was like an adult version of The Taming of The Shrew, among a lot of other things.

Gypsy and her younger sister have had a horrible childhood. So, she turned to conning rich men by exploiting the one advantage she has – her beauty. She excels at it too and is content with her life for now. Until Lucian, a lawyer infamous for representing the worst of the worst, decides that he wants her to marry him. He basically blackmails her into marrying her.

We start off with Lucian being a closed book. There’s a mystery behind him and his motivations. I liked that suspense element.

The slow evolution between Lucian and Gypsy’s relationship. That’s what had made me want to start the book in the first place. So, in a sense, I did get what I set out to read this book for.

There was this sub-plot about an innocent 19 year old guy who was charged with murder. His story did touch my emotional chords.

Things I was dubious about:

I wasn’t really convinced by the reveal of the reason behind Lucian marrying Gypsy.

There were drama and angst galore in this book. Some of the twists, I liked. Others just weren’t to my taste.

Anyways, I started this book fully aware that there would be elements that might not be my cup of tea, so I can’t complain about the parts that I skimmed through.

In a nutshell, this was an interesting read that I liked for the most part. But chances are high that I might not pick up its sequel.