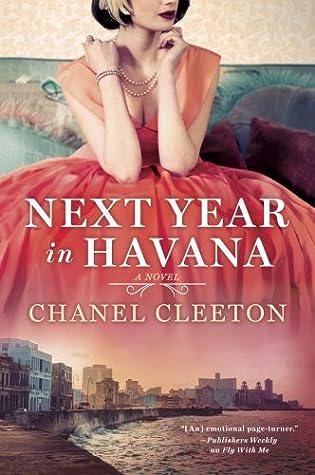 After the death of her beloved grandmother, a Cuban-American woman travels to Havana, where she discovers the roots of her identity–and unearths a family secret hidden since the revolution…

Havana, 1958. The daughter of a sugar baron, nineteen-year-old Elisa Perez is part of Cuba’s high society, where she is largely sheltered from the country’s growing political unrest–until she embarks on a clandestine affair with a passionate revolutionary…

Miami, 2017. Freelance writer Marisol Ferrera grew up hearing romantic stories of Cuba from her late grandmother Elisa, who was forced to flee with her family during the revolution. Elisa’s last wish was for Marisol to scatter her ashes in the country of her birth.

Arriving in Havana, Marisol comes face-to-face with the contrast of Cuba’s tropical, timeless beauty and its perilous political climate. When more family history comes to light and Marisol finds herself attracted to a man with secrets of his own, she’ll need the lessons of her grandmother’s past to help her understand the true meaning of courage.

Next Year in Havana definitely didn’t disappoint me. It however gave me bittersweet feelings. It left me feeling a little forlorn, to be honest.

I was invested in the story right from the beginning. The author takes very little time to set up the story both in the present and the past timeline. In 2017, Marisol is visiting Cuba for the first time in her life, only ever having heard stories about it from her grandmother Elisa. She’s there to spread the ashes of the grandmother who could not have her wish of returning to her homeland fulfilled. But once in Cuba, she finds that there was more to the grandmother who raised her as a daughter, than she knew.

In 1958, Marisol is experiencing her first love with revolution engulfing her country. A sugar heiress, she could pretend until recently that there weren’t big changes happening outside the walls of her high society life. But then her brother decided to become a revolutionary, and she herself fell drawn to a man who himself is a revolutionary.

I am not a fan of the ‘love at first sight’ trope. But I am a sucker for ‘the sparks at first sight’ as long as it’s not all elementary physical lust that many contemporary romances have reduced it to. I like my romances to have some slow burn and longing. Both the love stories in this one had them in spades. While Marisol thinks Luis is off-limits, Elisa’s feelings for Pablo have barely any future. Her father is a sympathizer of the ruling president, Pablo is a friend and a supporter of Castro, the revolutionary.

I was more invested in the past timeline with Elisa. I also liked her romance with Pablo. Both of them are as opposites as can be. And yet, these two managed to make it work. It had tragedy written all over it, and I guess that made me even more invested in them. The author managed to keep me curious and wondering about their fate. Which isn’t an easy thing to do. The mystery only made the story even more enjoyable. I also enjoyed Marisol and Luis’s parts but by the end I felt that there was more to tell as far as these two are concerned.

The author does really well to paint a beautiful and nostalgic portrait of Cuba then and now. I have very few ideas about Cuba’s history so I can’t judge about the accuracy, though. But this book certainly made me more curious to find more on this fascinating piece of history.

The last third of the book was not satisfactory to read, to be honest. The twists, and the reveals only left me feeling frustrated over the “what ifs”. It makes me even sadder that things like these could’ve easily been a reality for many Cubans back then.

I am not ready to read the sequel yet. I need to read a cute story before I can go back to this world. I would also like a sequel on Luis and Marisol. Even a novella would be welcome.

One thought on “BOOK REVIEW : NEXT YEAR IN HAVANA”