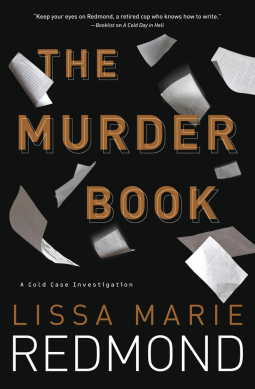 Cold case detective Lauren Riley wakes up in the hospital certain of two things: she was stabbed and left for dead…   and the person who did it was a cop.

After being brutally stabbed at her desk late one night, Lauren Riley works her way backwards through the haze to piece together who attacked her and why. A mysterious phone message forces her to enlist the help of a retired lieutenant to track down a witness who is desperate not to be found. As she digs into the Buffalo Police Department’s hidden past she uncovers a terrible secret, one a fellow officer would kill to protect.

Packed with suspense and featuring a detective who relentlessly—and with morbid humor—gets the job done, The Murder Book continues a series praised by Kirkus Reviews as “an excellent police procedural combined with a psychological thriller.”

It started out well enough. The beginning gripped me just as I’d hoped it would. But the charm wore off as the story progressed. I struggled to retain the same interest throughout the book that I felt at the beginning.

I think my biggest problem was the writing. There were many grammatical errors and some words felt misplaced. I hope the final version of the book gets the proper editing it deserves. Because it’s difficult to enjoy a book when you get distracted by such mistakes.

Lauren is a smart protagonist. Though, I felt that she was written as too impersonal, considering the past she’s had. Teen pregnancy, prostitution, domestic abuse, two divorces, stalkers – for someone with such terrible experiences, I was expecting a bit more emotional depth. It didn’t help that whenever we find out about each of these experiences, the mentions are written too casually. Also, having a protagonist with all of these happening to her has a cliché written all over it.

Maybe, if I’d read the predecessor to this book which I didn’t know existed until after I finished the book, I’d be less frustrated with the back-story of Lauren. There will be a third book too, going by how this one ends.

The main mystery was plotted out fine enough. There were no big shocking twists or unpredictability. It was the process through which the team gets to the results that mattered. I really liked Reese and Lauren’s equation. They were perfect partners for each other. It was also refreshing to have no romantic angle there. Charlie Daley was also a welcome addition to their team. Their team dynamic was the best part of the book for me. I also liked the realistic portrayal of the inner workings of the police department.

Ultimately, Murder Book disappointed me by not delivering the intensity and excitement I’d been expecting from this Mystery/Thriller.

Publication Date: 8th February, 2019.
Source: ARC from Publisher (via Netgalley)
You can find this book on – Goodreads | Amazon