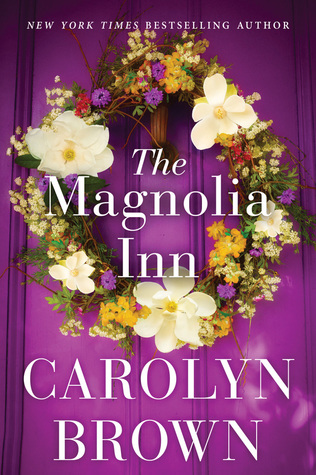 *I’d like to thank the Publisher for supplying me with this ARC for an honest review.*

Inheriting the Magnolia Inn, a Victorian home nestled in the East Texas pines, is a fantasy come true for Jolene Broussard. After living with the guilt of failing to rescue her self-destructive mother, Jolene knows her aunt and uncle’s B&B is the perfect jump start for a new life and a comforting place to call home. There’s just one hitch: stubborn and moody carpenter Tucker Malone. He’s got a half interest in the Magnolia Inn, and he’s planting his dusty cowboy boots squarely in the middle of her dream.

Ever since his wife’s death, Tucker’s own guilt and demons have left him as guarded as Jolene. The last thing he expects is for his new partner to stir something inside him he thought was gone forever. And as wary as Jolene is, she may have found a kindred spirit—someone she can help, and someone she can hold on to.

Restoring the Magnolia Inn is the first step toward restoring their hearts. Will they be able to let go of the past and trust each other to do it together?

What a slow and frustrating read!

Jolene and Tucker are forced by circumstanced to partner up and work on remodeling the Inn left to her by her aunt and uncle.

Most of the conversations between the two throughout the book are about the restoring of the inn. I’m sorry but if I wanted to read about all that, I’d have opted for Home Remodeling for Dummies, instead.

We spend 80% of the book with Tucker having conversations with his dead wife and trying his best to not let go of her.

When I opted for this book, I was hoping for a healing romance. Maybe a broody hero and an emotionally stunted heroine. A couple of funny incidents while remodeling the home too, perhaps. Instead, I got a cardboard heroine and a – I can’t even think of an adjective for what that hero was.

I can’t think of any scene with Tucker where he was not having an inner conversation with Melanie – his ex-wife or was comparing Jolene to her.

Tucker’s wife died while going to buy something from the store when he could’ve gone himself. He was a cop who got fired for drunk-driving after her death. He spends every Saturday drinking himself to a stupor because Saturdays used to be date nights with his wife. He proudly claims that he’s only a weekend drinker.

Jolene, on the other hand, had an alcoholic mother. She also has had a tough life due to her mother and a father who left. Her only purpose of life right now is running the inn.

I couldn’t at all emotionally connect with Tucker and Jolene at any point. Tucker talks about his guilt and keeps telling his dead wife that he misses her. But I never felt any of his pain. And we read about Jolene’s past difficulties but I don’t think the writer touches down on the emotions and feelings of Jolene regarding those things.

The romance was unconvincing. It should be when you have a hero spending majority of the book thinking of his dead wife and ensuring that no “spark” with Jolene hinder his connection with his dead wife. Yes, there’s a ‘spark’ at times when they touch. That was the extent of their romance for a long time.

I was hoping for some pining or emotional conflict from Jolene for growing feelings for an emotionally unavailable man. But there wasn’t really much of that from Jolene. And I get that Tucker lost a wife and he’s grieving her. But in that process, his romance with Jolene fell flat.

There was aunts and family members with their own shenanigans. I wasn’t interested by any of it. I found myself waiting for parts with them to end. The pace sort of picked up at the last third of the book. But that was too late to redeem the book for me.

If I wasn’t clear before, this was a disappointing read.

Publication Date: 25th September, 2018.
Source: ARC from Publisher (via Netgalley)
You can find this book on – Goodreads | Amazon

One thought on “ARC Review : Magnolia Inn by Carolyn Brown”