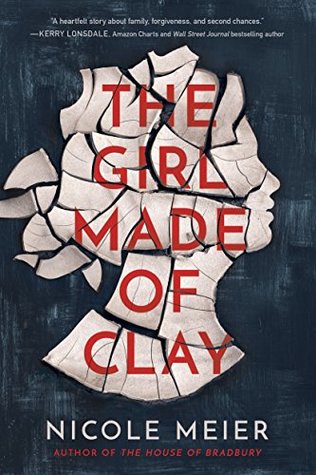 An emotional exploration of the frayed bond between a father and daughter…and what it takes to mend it.

After Sara’s father, famous sculptor Thomas “TR” Harlow, is badly injured in a fire, she’s suddenly forced to care for a man who is more of a stranger than a parent. Once known as his muse, Sara long ago lost her father to his desire to live the celebrity life.

Now TR’s abrasive and unpredictable presence in her home is reopening old wounds—and causing the rift in her already-strained marriage to deepen. As her young son begins bonding with the grandfather he never knew, Sara must decide if she can find it within herself to forgive the man who broke her heart all those years ago. Will she walk away from a chance to rebuild what was lost, or will she find, by bringing her father back to health, that healing can come in many forms?

First things first – Such a beautiful cover! I wanted to own the physical copy of this the moment I saw it. I still want to own the copy after finishing the book.

Sara has had a rough past. She’s forever been the responsible caretaker, even when she was a child and her father left her with a mentally unsound mother. Even now, she has to take care of everything with her pilot husband frequently flying away and leaving her with a household, a ten year old asthmatic son and a pet dog to look after. It’s definitely not easy being her, and her estranged father’s injury only makes it harder.

Her father Thomas (TR) didn’t leave a good first impression on me at the beginning. But I slowly warmed up to him, just like Sara. But it was not easy for Sara to come to that point. And she can’t be blamed. Which child would welcome their parent back after being abandoned in their childhood?

You also tend to feel frustrated for her, about how her husband Charlie keeps leaving for long stretch of flight duties. Although, when Charlie is present, he seems to be considerate and supportive of her most of the times. Still, I wasn’t a fan of Charlie. Sam, though, Sara’s son was adorable and the relationship between was really beautiful. Both Sam and Charlie are good parents.

We see Sara struggle a lot to be welcoming to her father throughout the book. Her stream of conscious was believably complicated. Both she and her father are not big talkers so we see a lot of streams of consciousness most of the book. And that made the book slightly slow paced.PU

There were many secrets and mysteries that were not completely unpredictable and yet the reveals and resolutions in the end were well executed. There was nothing too extraordinary about the plot but I still found myself engaged because of the lovely evolution of the relation between Sara and her father.

If you’re in mood for a simple read with themes of family drama, second chances and forgiveness, then this is the book for you.

You can find this book in – Goodreads | Amazon

Hazel Camille Bradford knows she’s a lot to take—and frankly, most men aren’t up to the challenge. If her army of pets and thrill for the absurd don’t send them running, her lack of filter means she’ll say exactly the wrong thing in a delicate moment. Their loss. She’s a good soul in search of honest fun.

Josh Im has known Hazel since college, where her zany playfulness proved completely incompatible with his mellow restraint. From the first night they met—when she gracelessly threw up on his shoes—to when she sent him an unintelligible email while in a post-surgical haze, Josh has always thought of Hazel more as a spectacle than a peer. But now, ten years later, after a cheating girlfriend has turned his life upside down, going out with Hazel is a breath of fresh air.

Not that Josh and Hazel date. At least, not each other. Because setting each other up on progressively terrible double blind dates means there’s nothing between them…right?

Josh and Hazel’s Guide to Not Dating has been on my tbr list since I found out about it in June. My past experience has mostly been disappointing with books I get excited about. Thankfully, that wasn’t the case for this one.

This is now on my top 3 best contemporary romances I read this year. I absolutely adored this book. Josh and Hazel were perfect! Their friendship and love for each other warmed my heart.

Hazel was wonderfully weird. I could relate to her at so many levels! I like to think I’m embarrassing and lack no mouth filter just like Hazel. (Well, maybe not to the extent she is, but close.) Hazel was no-nonsense and loved herself. It was so beautiful to see her knowing that she’s too much for a lot of people and still determined to not change herself.

“The world seems full of men who are initially infatuated by our eccentricities, but who ultimately expect them to be temporary.”

We see people throughout the book being embarrassed by her and trying to tone her down. The way she handles these people and yet hides the pain she feels from that was so heartening and sad to read. Yes, I loved her larger-than-life persona, but her vulnerabilities won me over. It was also sad how she wouldn’t let herself entertain ideas of something more with Josh because she thought she wasn’t good enough for her.

“I realize that finding the perfect person isn’t going to be easy for me because I’m a lot to take,” she says, “but I’m not going to change just so that I’m more datable.”

And Josh Im? Josh, oh Josh! Josh really was the perfect guy that Hazel liked to call him. He might be the epitome of all things nice, stable and dependable. He was the antithesis to Hazel’s craziness. And yet, he wasn’t boring. The way he let Hazel shine and just be, made butterflies flutter in my stomach. And every time someone said something remotely negative about Hazel, Josh’s protectiveness springing up melted my heart. It was great to see a hero so in tune with his emotions.

“He doesn’t need me to change or pretend to be someone else. He’s my person. He’s my best friend.”

The plot was good. One thing I really appreciated was that although Josh and Hazel are forced to become roommates for a while, that’s a temporary. I’ve read enough books where something or other forces the protagonists to stay roomie permanently. But no, the friendship between Josh and Hazel was a lot more than being forced roomies.

There was no rivalry or misunderstandings. It was nice to see mutual respect and consideration between two protagonists, which is such a rarity in contemporary romances these days.

I’ve been all praises for this book so far but the direction it took at the end kind of dulled the awesomeness of the book for me. That twist wasn’t as bad as to change my love for the book. I didn’t hate it. But I think I’d have preferred a different direction than the one it took.

In short, if you like contemporary romances that are laugh-out-loud funny; have slow burn, great chemistry, steamy scenes, healthy relationships; then this is the one for you.