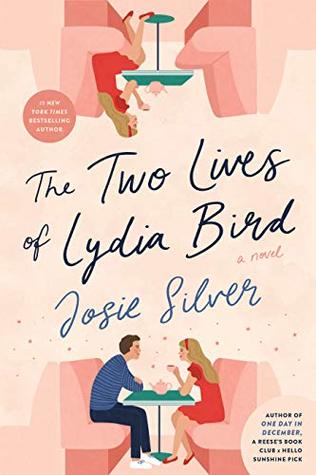 Lydia Bird is living a happy, normal little life–she has a good job, a wonderful fiancé, Freddie, and the usual daily dramas of buying groceries and being in a relationship. And then everything stops: Freddie is killed in a car crash on his way to pick up his best friend, Jonas. Her world bottoms out.

Lydia retreats from the company of her sister, her mother, and from Jonas, the only other person who understands her loss. Alone and adrift, she seeks a small amount of solace in the sleeping pills her doctor prescribes for her, which give her relief in the form of abnormally deep sleep. But they also come with an increasingly complicated gift: Whenever she takes a pill, she emerges in another world. A world in which Freddie is still alive.

And so Lydia returns again and again to the doorway of her past, living two lives, impossibly, at once. In one, her relationship with Freddie and her friendship with Jonas move along as scheduled, and in the other, that same friendship begins to become something else, something very unexpected and yet thrillingly familiar.

Written with Josie Silver’s trademark warmth and wit, The Two Lives of Lydia Bird is a powerful love story, by turns joyous and devastating, about the questions of fate and chance that we find at life’s crossroads, and what happens when one woman is given the painful, miraculous chance to answer them.

Josie Silver remains a frustrating author just as she was in her debut One Day in December. That does not mean I did not like The Two Lives of Lydia Bird. Rather, I liked it very much so. But it suffers from the same problems as her first novel, if not more. Here’s my two cents the book.

The beginning is slow and sluggish

I struggled a lot when going through the beginning of the book. I was very close to DNF-ing. So I skimmed through much of it until a part came that did manage to grab my interest. The writing could have been better at first. I’ve read books where tragedy strikes very early in the book, and even then it is no less impactful. Maybe if we had seen a sweet scene between Freddie and Lydia right at the start, things would have been different. But here the death of Freddie wasn’t impactful. It did not keep me glued to the pages. Instead, the pacing suffered even more. Nothing happens for a long time.

Although it does not start in a promising note, Lydia’s journey was beautiful to read. It was stirring to see her find her way through grief. But when she starts to take prescription medicine for sleeping during which she lives an alternate life with Freddie in it, one question kept recurring in my head – ‘Why? Why is this happening?’ I kept wondering what the purpose of this whole alternate life arc was. Is this for her healing? Couldn’t she heal all by herself without it? And as the story progresses, I could see events in this alternate life did affect her feelings and actions in the present tense.

By the end I still could not understand why this ‘alternate life arc’ was introduced. Sure, it did accelerate her healing process, but couldn’t she have done all this by herself? There is this particular event in the alternate life that is jarring for Lydia because it’s ugly, totally unlike the sweet escape that she expects to experience with the help of sleeping. I felt it was a lazily convenient approach to bring her to an epiphany about. I would have preferred an alternate version of this book without the parallel life arc where Lydia achieves the same things without that crutch, and we get a little more insight into the other characters.

Right now, I also want an alternate ending that is not abrupt. Yes, you read that right. Josie Silver yet again delivered an unsatisfying and abrupt ending to her book. Okay, not completely unsatisfying, because the final scene did give me butterflies. But the butterflies died a fast death at the abrupt ending. What would it take for her to give us an epilogue?

The romance or what little there was of it was not satisfying. It was poignant and beautiful. But not satisfactory. I wouldn’t even call it a romance. It’s a love story between two friends and is more about them coming to terms with an unimaginable loss individually and together. I don’t want to give a spoiler even though it’s clear from the very beginning who’s the love interest. But we don’t see enough of him in my opinion. I loved him and longed for a deeper insight into his character. His point of view would have done wonders for me! Yet, I understand that this was Lydia’s journey. I rooted for her. I cheered for her. And I deserved a better payoff!

2 thoughts on “BOOK REVIEW : THE TWO LIVES OF LYDIA BIRD”