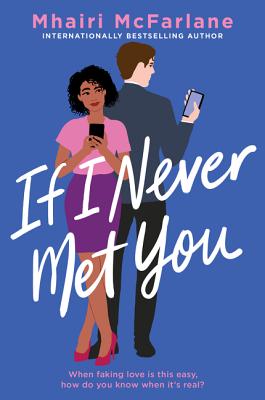 When her partner of over a decade suddenly ends things, Laurie is left reeling—not only because they work at the same law firm and she has to see him every day. Her once perfect life is in shambles and the thought of dating again in the age of Tinder is nothing short of horrifying. When news of her ex’s pregnant girlfriend hits the office grapevine, taking the humiliation lying down is not an option. Then a chance encounter in a broken-down elevator with the office playboy opens up a new possibility.

Jamie Carter doesn’t believe in love, but he needs a respectable, steady girlfriend to impress their bosses. Laurie wants a hot new man to give the rumor mill something else to talk about. It’s the perfect proposition: a fauxmance played out on social media, with strategically staged photographs and a specific end date in mind. With the plan hatched, Laurie and Jamie begin to flaunt their new couple status, to the astonishment—and jealousy—of their friends and colleagues. But there’s a fine line between pretending to be in love and actually falling for your charming, handsome fake boyfriend..

Brace yourselves, people. I’ll be pinging this book every chance I get from here on. This book was everything it could be. Bear with me while I try to articulate my incoherent feelings of adoration for this book into words. Let me try that by listing down some of the things I loved about the book :

The best and most realistic portrayal of a breakup I’ve read
The protagonist is blindsided at the very beginning when her boyfriend of 18 years breaks up with her. We see Laurie go through all the feelings – disbelief, shock, denial, betrayal, anger, sadness and acceptance. I felt like I was going through the stages with her. I also wanted him to want her back when she did. And when she realized that he’s no longer important, I was right there with her too. That more than anything else is telling of the conviction in the writing.

The heroine and her satisfying journey
This book is above all about Laurie and her journey. And how beautifully is it written! Laurie is incredibly likeable. She’s also smart, self-aware and outspoken. The only flaw she has? She doesn’t know her own charm. You’d think her journey would be difficult. But more than anything, it was satisfying and believable. To see her evolution and development was perhaps the most satisfying reading experience for me so far in this year.

The best execution of a fake-relationship trope
This is the best fake-relationship romance I’ve read in a long time if not ever. Every little encounter that leads the couple to having a fake relationship is as organic as it gets. Not for a moment did I find the reasoning illogical as is usual with me. And that is because, the characters themselves debate all these things. The heroine is very self-aware of why she’s doing this. She also has her best friend cautioning her about the repercussions. There are no loopholes here. This is very smart writing, I must say.

The Hero who’s respectful, earnest, funny and honest
Jamie Carter is a conventional playboy at a glance. Laure initially is very judgemental about him, thanks to workplace gossip, until the fated day they get stuck on an elevator. That’s when she and we realize how unconventional he is. He calls himself a communist in relationships. He has an unbeatable logic when it comes to his views on monogamy. But then at the end, he’s also smart enough to realize his own ignorance.

To add to it all, Jamie is respectful of Laurie unlike the other men in her life. He has an earnestness which shines in many an instances, for example, there is a part where he is talking to Laurie about the correct terminology about her mixed race won me over at an early stage. He’s also hilarious!

This book made me think
It’s a rarity when romances make you think. I knew I’d like this book, but just as a run-of-the-mill romances. But it made me think of so many things – relationships, power play in relationships, love, gender roles, gender politics, feminism and what not.

If I haven’t already made it clear already, I love this book. The synopsis does little justice to this gem of a book. It’s just a very satisfying read.

5 thoughts on “BOOK REVIEW : IF I NEVER MET YOU”