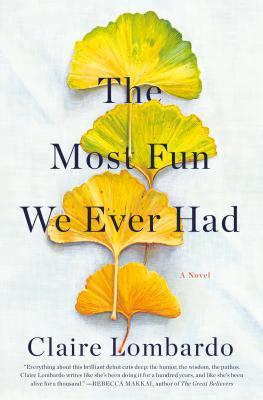 A dazzling, multigenerational novel in which the four adult daughters of a Chicago couple—still madly in love after forty years—recklessly ignite old rivalries until a long-buried secret threatens to shatter the lives they’ve built.

When Marilyn Connolly and David Sorenson fall in love in the 1970s, they are blithely ignorant of all that’s to come. By 2016, their four radically different daughters are each in a state of unrest: Wendy, widowed young, soothes herself with booze and younger men; Violet, a litigator-turned-stay-at-home-mom, battles anxiety and self-doubt when the darkest part of her past resurfaces; Liza, a neurotic and newly tenured professor, finds herself pregnant with a baby she’s not sure she wants by a man she’s not sure she loves; and Grace, the dawdling youngest daughter, begins living a lie that no one in her family even suspects. Above it all, the daughters share the lingering fear that they will never find a love quite like their parents’.

As the novel moves through the tumultuous year following the arrival of Jonah Bendt—given up by one of the daughters in a closed adoption fifteen years before—we are shown the rich and varied tapestry of the Sorensons’ past: years marred by adolescence, infidelity, and resentment, but also the transcendent moments of joy that make everything else worthwhile.

Spanning nearly half a century, and set against the quintessential American backdrop of Chicago and its prospering suburbs, Lombardo’s debut explores the triumphs and burdens of love, the fraught tethers of parenthood and sisterhood, and the baffling mixture of affection, abhorrence, resistance, and submission we feel for those closest to us. In painting this luminous portrait of a family’s becoming, Lombardo joins the ranks of writers such as Celeste Ng, Elizabeth Strout, and Jonathan Franzen as visionary chroniclers of our modern lives.

I have a hard time as it is to make my reviews short. Even when the books are short and sweet, with only a couple of main characters, and spanning a few months. The Most Fun We Ever Had is a 532 page book, about 6 main characters and spanning half a century. A piece of cake, right?

So, yeah. I’ll just diverge from my usual approach of writing reviews, to ensure that I don’t end up writing a novella myself while reviewing the book. Here I go.

The novel is centered on a dysfunctional family. The story alternates between past and present. The past chronicles the whole history of the family, from the first meeting of Marilyn and David – the parents – to all the important events that shape up their family. This is a character-driven story. It’s the characters’ complex decisions and actions that take the story forward. I found parts of it gripping, and others hard to get by.

There’s only one word for describing each of the characters here – flawed. They have all at one point or another behaved selfishly, done terrible things and hurt others. I found David and Marilyn to be careless and irresponsible more than once. Wendy, the eldest sister, is the brashest and doesn’t hold back from punches. But she’s been dealt the worst among them all. And that made me dislike her the least among the characters. I found Liza horrible for the way she treated her boyfriend suffering from depression. Grace also annoyed me with her lies and immaturity

But it was Violet that I despised. This is a character who’s the most selfish and inconsiderate throughout the book. The way she treats Jonah – the son who she had given up for adoption right after his birth 15 years ago, and is again now back in her life – is just awful. Her insecurities about him hurting her family of a husband and two sons drive her to do some horrible things. The author does her best to redeem her in the end, but it didn’t work for me. In fact, it was only Jonah who I cared about and probably read the whole book for. If it wasn’t for him, I’d probably have DNF’d it.

Even though I wasn’t a fan of the characters, I did like the very realistic portrayal of sisterhood. The complicated feelings between sisters – love, loyalty, jealousy, entitlement, and above all forgiveness – are all very convincingly conveyed in the story. The writing was engaging but it wasn’t perfect by any stretch. The story touches upon some very serious issues like infidelity, mental health, alcohol abuse, grief. But the author treats them with very little respect and only uses them as plot devices or an afterthought.  And that was a big let down.

I find it commendable how the book is unapologetic about how realistic and humane its characters and their actions are. It’s not perfect. Real life hardly ever is. But that doesn’t mean I have to like it, does it?

P.S. I failed in my attempt to keep it concise. But I know myself well enough to be happy that the review wasn’t even bigger.

4 thoughts on “BOOK REVIEW: THE MOST FUN WE EVER HAD”