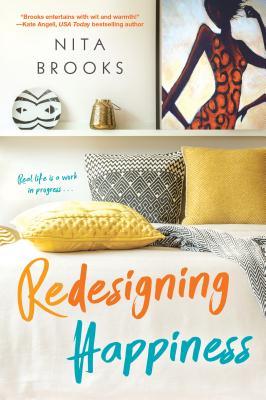 It wasn’t easy for Yvonne Cable to get over a heartbreaking relationship and revamp her life. But now the once-broke single mom is Atlanta’s most sought-after interior designer–and one-half of the media’s hottest power couple. She and her celebrity fianc�, Nathan, are a perfect, practical match, on–and off–camera. And with their new home improvement reality show the object of a fierce network bidding war, there’s no limit to how far they can go . . .

But Yvonne is stunned when mogul Richard Barrington III unexpectedly makes an offer for their program. He’s the man she thought left her for a more successful woman. And he’s the father of her son–though he didn’t know it until now. Richard wants to get to know their boy, and Yvonne agrees, though she’s wary. Yet little by little, she’s finding it hard to resist the responsible, caring man Richard has become. But when a scandalous leak puts everything Yvonne’s worked for at risk, she’ll have to look beyond surfaces to come to terms with who she is–and discover what she truly wants.

I have very little to say about this book.

I requested this because I found the whole interior designer bit interesting. And who doesn’t like a good second-chance romance?

Sadly, there was very little on Yvonne’s job as an interior designing. Rather, it was used as some sort of a plot device to set up the romance. But this is a protagonist who’s supposed to be a popular interior designer with a TV show on the pipeline. So I was hoping to see her do more interior designing.

Yvonne’s a single mother engaged to Nathan. But Richard, her ex and the father of her son re-enters the scene and causes complications. For one, he didn’t know he had a son. To make matters worse, Yvonne still has feelings for him.

I’m not someone who actually doesn’t mind the whole trope of ‘guy finding out that he had a child all along’. But only if the writer can actually sell it well. And to sell it well, both the reasoning for him having not known and the aftermath of him knowing about it, should be convincing. The author failed on both parts in this one. I was really underwhelmed by Richard’s interactions with the son after the big revelations.

There were some big twists and secrets come out in the end, all of which turned the story even more unbelievable to me. I also was not sold on the romance. I did not feel any connection between the main couple. There was no organic development.

The ending made it look like there would be a sequel. I’ll take a pass on that.