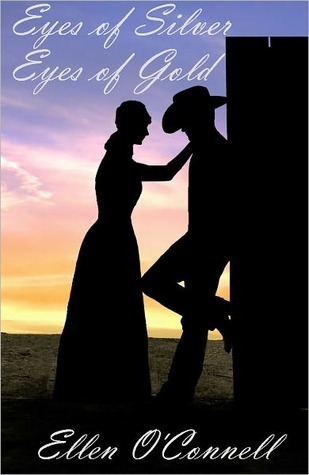 Eyes of Silver, Eyes of Gold is a story of family conflicts set in Colorado in 1885. Anne Wells has embarrassed her rigidly proper family since she was a child with occasional but grievous lapses from ladylike behavior. They blame those lapses for the disgraceful fact that she is a spinster at 28. Cord Bennett, the son of his father’s second marriage to a Cheyenne woman, is more than an embarrassment to his well-to-do family of ranchers and lawyers – they are ashamed and afraid of their black sheep. When Anne and Cord are found alone together, her father’s fury leads to violence. Cord’s family is more than willing to believe that the fault is his. Can Anne and Cord use the freedom of being condemned for sins they didn’t commit to make a life together? Or will their disapproving, interfering families tear them apart?

This was one of the most satisfying reads for me this year. My heart is actually full.

I’ve rarely ever read a “Arranged/Forced marriage” trope done so beautifully and organically. There was a perfect balance between action and romance that did enough to make it to the top of my favorite reads of the year.

28 year old Anne has run from her parents to escape a forced marriage to a man twice her age. In the night of storm, she seeks refuge in a barn only to wake up to find out the owner staring at her. It’s Cord, a man considered almost a pariah by her town, for his half-Indian blood and infamous temper. But Anne isn’t scared of him. Before she can convince him to help her escape the town, her father along with a mob finds her in what they believe is an compromising situation. They leave after beating them up until Cord is half-dead and Anne bleeding, with the local priest forcibly marrying them off.

After Anne nurses Cord back to health, they decide to make their sham of a marriage real. Nobody is happy. Anne’s father and the people in the mob thought Cord would be dead and Anne would go crawling back to her father. The townspeople including Cord’s own family are led to easily believe that Cord forced himself on her. Cord himself doesn’t believe that this marriage will last and is mentally prepared for Anne to leave him for a king she deserves. But Anne finds herself happy being a wife of Cord, and tending to his household and barn.

Anne and Cord’s relationship progress was organic and delightful to read about. Anne is probably the first woman who doesn’t fear him, and he’s the first person who respects her. The way they slowly grow to understand, support and stand up for each other was delightful. We’re talking about a relationship that progresses from an expressionless Cord reminding Anne that she’ll probably leave him soon, to teasing her about having enough money to escape to Paris without him. I loved every step of it. My heart melted right with Anne’s when Cord calls her Annie for the first time.

Anne’s my favorite kind of heroine with the perfect blend of warmth and strength. Even when the mob is forcing her to repeat wedding vows in distress, she omits ‘to disobey’. From her fear of spiders, to her belief that horses can be cured of any aliment with oodles of sugar and sweet-talking, I found everything about her endearing.

But my heart bled a little more for Cord. This is a man who’s resigned to his own family’s mistrust of him, because of his Indian blood. Who can blame him for thinking Anne to be too good for him? He is a kind and gentle soul, with a brittle exterior. I loved every moment of his layers being peeled off.

Cord’s brothers love him. But some past events have forced them to believe the worst of him. Cord is the child of a second marriage of his white father to an Indian marriage. After his parents’ death, his elder half-brothers raised him as their own. But they could never understand his plight, being white themselves. I was so annoyed by Ephraim and Frank’s mistrust of his brother at first. But I also respected how they never lost a chance to let Anne know that she could always come to them if she wanted to escape what they felt was a marriage of abuse. Eventually, my annoyance turned into amusement over their refusal to see Cord’s love for Anne.

I also love how the author can so masterfully paint a perfect portrait of the racial prejudice that people of Indian blood had to face, that even the thought of having a child with Indian blood is unacceptable.

You know how much I loved this novel by the length of my review. I would wax poetry about this heartwarming romance if I could!

4 thoughts on “BOOK REVIEW : EYES OF SILVER, EYES OF GOLD”