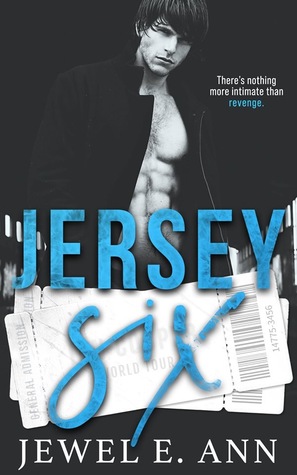 How far would you go for revenge?

A hit-and-run accident leaves Jersey Six orphaned and homeless on the streets of Newark, shattering her dreams of school dances, pink nail polish, and a diploma.

Eight years later, a burn victim with amnesia wanders into Jersey’s barely-existent life. She resists his efforts to form a friendship until he reveals knowledge of the person responsible for derailing her future. Through their unusual friendship, she discovers a way to avenge the deaths of her foster parents.

All she has to do is destroy the world’s biggest rock star.

In the ultimate game of sex, lies, and manipulation, can Jersey discover the truth? Or will she be blinded by attraction, deceived by love, and destroyed by her past?

I felt so much anger when reading this crazy story!

When I read the synopsis, I thought it would be a lot like Cruel Intentions. But it wasn’t.

Jersey has been living rough in the streets since her foster parents got killed in an accident when she was 15. 8 years later, Chris – a burn victim suffering from amnesia comes her way in the local gym. He remembers bits and pieces from his past. And he also claims that he knows the guy who killed Jersey’s foster parents. So Jersey takes him under her wings and lets him live with her, so that when he can remember everything and reveal the mystery behind the death of her foster parents, she can kill him.

Then Jersey has a meet-cute with Ian. She has no idea he’s a rockstar. He decides to take pity on her and offers a job to her. Without knowing what the job is, she takes it up because she’ll get a place to live in and free food. But she also convinces him to take Chris with them. They join his crew for a tour. Jersey and Ian share a mutual attraction. But then Chris claims that Ian is the guy who killed her foster parents. He encourages her to seduce him and then kill him.

Okay. The plot had enough meat to keep me going. I didn’t know what to expect.. Well, rather, what I expected didn’t come to fruition. But  there was definitely enough mystery to keep me interested, even while I kept saying to myself ‘WTF is going on!’.

I just could not tolerate Jersey as a heroine. She has had a horrible childhood. She’s been subject to all kinds of abuse and whatnot. But that did not justify her violent, unpredictable and over-reactive behavior to me. I found her to be really unbalanced. And I completely abhorred her erratic treatment of Ian.

She meets this guy she has no idea about. And she takes everything he says for face value. I’m talking about Chris here. He has amnesia and only can recall fragments from his past. And she just lets that misguide her into playing this push-pull game with Ian. I found her character to be contradictory. She finds it hard to trust Ian but could do that easily with Chris. She can’t trust Ian and yet takes advantage of all the benefits of being with him.

Ian has provided her with a stable life and she is so bloodthirsty and obsessed with one incident of her past that she is ready to kill him if he proves to be what she thinks he is. She also has minimal regrets for her wrongs. And then in the end, she does something I consider to be unforgivable.

Ian was frustrating in his own right. If he came clean right at the beginning, all this lunacy would not ensue. But I guess, we wouldn’t have this story then too.

I don’t mind books about protagonists who are flawed as much as Jersey is. But we don’t really see her redeem herself. We don’t see her recover from her erratic and manic behavior. We don’t see her go to therapy or any conscious attempt to right her wrongs.

I usually love Jewel E An’s unique stories. She has a unorthodox writing style that appeals to me. But this one just totally missed the mark for me and turned out to be my least  favorite book by her.