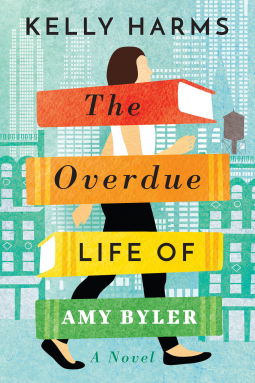 Overworked and underappreciated, single mom Amy Byler needs a break. So when the guilt-ridden husband who abandoned her shows up and offers to take care of their kids for the summer, she accepts his offer and escapes rural Pennsylvania for New York City.

Usually grounded and mild mannered, Amy finally lets her hair down in the city that never sleeps. She discovers a life filled with culture, sophistication, and—with a little encouragement from her friends—a few blind dates. When one man in particular makes quick work of Amy’s heart, she risks losing herself completely in the unexpected escape, and as the summer comes to an end, Amy realizes too late that she must make an impossible decision: stay in this exciting new chapter of her life, or return to the life she left behind.

But before she can choose, a crisis forces the two worlds together, and Amy must stare down a future where she could lose both sides of herself, and every dream she’s ever nurtured, in the beat of a heart.

This one was full of heart!

A term is used to describe Amy Byler quite a few times in the book – Martyr. She’s embraced the life of a single mother perfectly after her husband abandoned her and their two children. Now, he’s back. And she’s conflicted about whether to trust him or be wary. Should she be happy that he’s now determined to be the father to their kids or be insulted that he’s not here for her? But ultimately, she lets the mother in her decide it for her. It also helps that she’s got two amazingly mature kids who are capable of looking at the big picture. And John, her husband seems genuinely contrite.

After she decides to give him his one week with the children, and visits New York, life takes a turn. She’s in for a whirlwind thanks to her two best friends and her desire to make the best of. What follows is a makeover, one night stand, dates, and a #Momspringa. But it’s not all smooth sailing. There is guilt for enjoying too much and not missing the tiresome aspects of parenting. There is also turmoil over pent up feelings for her ex-husband who is still legally not her ex. Not to mention her new feelings for Daniel, a single father settled in New York.

The author does a brilliant work of painting all the shades of Amy’s character. You find yourself rooting for her really fast and just wanting her to be happy. Then there are alternate chapters where we see her daughter Cory’s entries on a reading journal Amy gave her for the summer so that she could write about the books she assigned her. But of course Cory, a teenager, prefers Hunger Games over The Curious Incident of the Dog in the Night-Time. Amy’s a librarian and is intent on her children getting the same literary enrichment she herself got. Her journal entries are laugh-out-loud hilarious. The transition from a teenager’s musings to a woman’s journey was just flawless!

Every mother would want Amy’s kids. Cory is a hilarious and mature teenager. Joey is eleven and yet has the vocabulary of a grown-up and is just too sensible for his own good. Not to mention the two friends – Talia and Lena, her biggest supporters. This book made me laugh out loud and just want to hug Amy multiple times. I’m not a mother myself but if I ever become one, it wouldn’t hurt to be a mom like Amy.