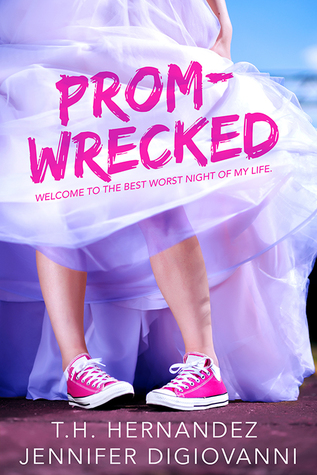 Their prom night ended in a jail cell with forty of their closest friends. But that’s hardly the worst thing that happened to them…

When the principal announces prom is canceled this year, senior Riley Hart is determined to save it. Armed with little more than her own enthusiasm, she ends up working closely with Owen Locklear, who is more than completely off-limits. Because he’s the boyfriend of her ex-BFF, Catherine Reed. Still, Owen knows Riley better than almost anyone, and his charming ideas for turning the prom upside-down and backward win Riley over.

Then they lose their deposit. Twice. And book a band full of octogenarians. And don’t even get her started on the act of God that takes down their venue…

Riley will have an unforgettable teenage experience, damn it, if it’s the last thing she does…

I requested for this ARC hoping for a light and easy read. I wasn’t disappointed. But this wasn’t one of those ARCs that exceed your expectations or blow your mind even. It was just alright.

The plot is pretty straight forward. After senior prom gets canceled due to funding problems, Riley decides to take matters into her own hands, with help from her friends to organize prom.

I don’t really have much to say about this book.

Things I liked – Alternate POVs of the former best friends Riley and Catherine. I don’t remember the last time I read a book with only POVs from two girls and not their love interests. Although I could not relate to it, I liked that there was a lot of details about the high school life here. This isn’t a book where high school is just used as a background with the characters acting as adults. No. The high school is at the forefront here. And the characters here are teenagers with all their angst, insecurities and self-importance.

Things I didn’t like – One thing about this book being so high school centric was that it relied more on the shenanigans for the story to proceed. So, it wasn’t focused on characters like I want my high school reads to be. I wanted more character evolution. The romance wasn’t well-developed. The sense of humor also didn’t appeal to me very much.

If you’re in a mood for a quick and light read, this could be the book for you.

April has been a splendid reading month for me. And I couldn’t be happier about it! I don’t know whether I’ll be able to read as much in May as Ramadan is upon us, and fasting slows my reading down. But I have quite a few ARCs pending and I hope to make progress with them. Happy May, you all!