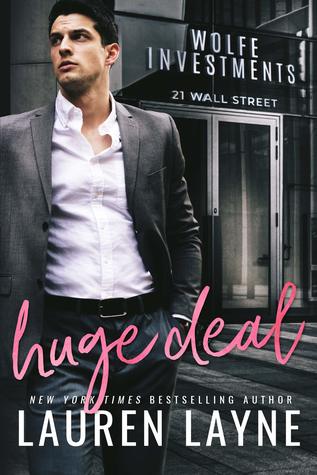 An alpha among the wolves of Wall Street, Kennedy Dawson rose to the top of the pack by striking the right contracts at the right times. But there’s one deal that’s been giving him a run for his money—a pact to never again let his assistant, Kate, get under his skin. She may be smart, gorgeous, and sharp as a whip, but she’s definitely off-limits.
Kate Henley isn’t a banker, but she knows a thing or two about risk management—specifically, about managing her attraction to her smolderingly sexy boss. She already fell once, and Kennedy showed no sign of paying a return on her investment. So when Kennedy’s brother starts pursuing her, Kate figures she has the best of both worlds. Jack is charming, rich, very attentive, and the spitting image of his older brother.

It’s also making Kennedy think twice. But to win Kate’s heart, he’ll have to broker the deal of a lifetime…and prove he’s worth the risk.

So I haven’t been able to read the first installment of this trilogy yet, but I think this book will still be my favorite of the trilogy after I read that.

I really loved this one. I liked the idea of the rational and overthinking hero with a romantic heroine. I loved both Kennedy and Kate. Kennedy is my favorite kind of brooding, quiet and serious hero. Kate is the smart and witty heroine who won’t let anyone put her down. She did not let Kennedy intimidate her. There were a lot of layers to their characters that I enjoyed.

Kate believes in love at first sight. The cupid hit her the moment she laid her eyes on Kennedy. But she tried her hardest to keep her feelings in check. And when she overheard Kennedy saying something unpleasant, those feelings took a backseat and she took the conscious decision to move on. I appreciate that she did not deny that she was still attracted to Kennedy.

The development of the romance was nice to see. Although the use of jealousy as a device was kinda cliched but I think the author handled it quite well so as not to make that the main motivation behind the change in Kennedy but rather a catalyst helping him realize his feelings. I also love how Kennedy was almost too mature and did not just make grand declarations when he realized his feelings for Kate, and then took a step back when Kate asked him to. It’s always good to see such realistic takes on relationships in a book. I also liked the friendships and Kennedy’s family.

The ending was alright but I guess I had higher expectations as I went ahead in the book because I thought it could be better. But it was definitely a good read.