UPDATE : I’m trying a new format for my reviews from today. Hope you guys find it alright! 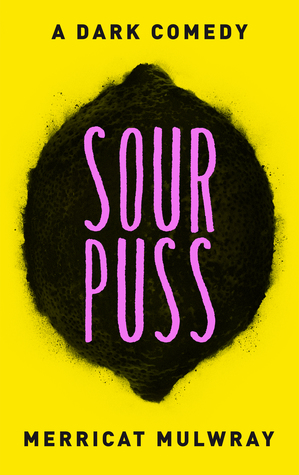 Sourpuss is a blistering satire of the depraved and entitled culture that pervades college campuses.

She’s sprinting through her senior year obsessed with winning a spot on the US Olympic track team. But she runs straight into a hurdle in the form of fraternity president Graham Patterson, an intern assigned to help her recover from an injury – one she blames on him.

Once Graham’s therapies begin to work, Mallory pretends to fall in love but traps herself in her own scheme and tailspins deep into his debauched world. When a scandal erupts which threatens to shatter her Olympic dreams once and for all, Mallory must finally face the dark truth she’s been running from since freshman year.

In the style of a ’90s dark comedy flick, Merricat Mulwray’s debut brings an insightful and humorous perspective to the reckless behavior college students perpetually get away with. Mallory, herself a flawed heroine, is backed by a self-serving cast of athletes, party girls, townies, and fraternity brothers so hilariously dark that the book will leave you wondering if anyone ever gets what they deserve.

I clearly suck at making decisions about ARCs. What compelled me about this book was the main character being an ice queen. I have a weakness for the Blair Waldorfs of the world. But this queen had all ice and no substance. I keep saying that there is a huge difference between being flawed and unlikable. I can list a number of characters that are flawed and jerks and yet somehow likable. Mallory is not among these characters. But she’s bold and fearless even in her unpleasantness. I’ll give her that.

But the males in this book? They’re beyond horrible. I don’t remember the last time I read men being written so despicably. There’s not even one male character with a redeeming quality! There was no lack of  misogyny.

I get what the authors were trying to do. They don’t hold back from showing the ugliness in human nature. There doesn’t seem to be any good in the humans portrayed here. It’s all debauchery and lechery. I’m not really familiar with the fraternity scene. But if what we see of frat life in this book is true, then that’s an alarming thing altogether!

I did not enjoy this read. It’s a cynical, harsh and a cringe-worthy world in Sourpurss. And it’s obvious that this was all intentional from the authors’ part. I get what they were trying to do but I just found it all very unpleasant. Not my cup of tea.