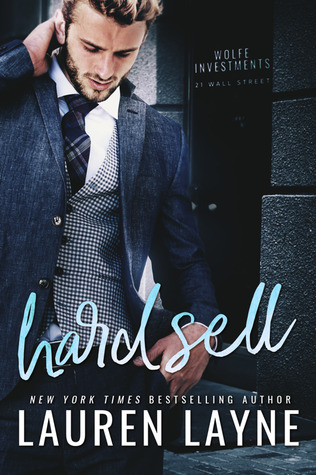 Twenty-eight and filthy rich, Matt Cannon is the youngest broker on Wall Street. He may be a “boy wonder,” but he’s every inch a man. Ask any woman—any night. But when Matt’s latest fling makes scandalous headlines, his clients get anxious, and his bosses at Wolfe Investments level an ultimatum: keep his assets zipped, get a “real” girlfriend, and clean up his act. Only one woman can help Matt with something this hard.

For PR genius Sabrina Cross, the best fixer in Manhattan, playing Matt’s steady is going to be a challenge, even if it’s just for show. They already have an explosive history, she can’t stand the cocky party boy, and worse—she can’t stop thinking about him. So who’ll dare to break her “no touching” rule first? Because when that happens, Matt and Sabrina’s game of let’s pretend will get so hot it could set both their reputations on fire.

I was in the mood for a cute and fun romance and I knew Lauren layne wouldn’t disappoint. She didn’t. I’d initially planned to start with the first in the series – Hot Asset. It was kind of a spur-of-the-moment decision to read this one first. I’ll read the previous one soon too. It would be great to see a glimpse of Sabrina and Matt’s initial state of affairs. They’re frenemies with benefits before this book although we don’t get to see that part of their relationship. When we meet them in this book, it’s in the aftermath of a scandal that’s got the party animal and playboy Matt on the hot seat with his bosses. So, he turns to Sabrina, a professional fixer, to help him out.

Matt and Sabrina have a long history. They had a one-night stand that turned into a non-exclusive arrangement with no-strings attached. But it was not a happy arrangement. Matt said some things after their first night together that turned their equation bitter. I would’ve liked to see a flashback or more details about that first encounter that caused the whole tension between them. But I enjoyed Matt and Sabrina’s clashing chemistry. I also loved how their conversations always seemed to go south with one of them – mostly Matt – ending up putting a foot in his mouth. Both of them are career-driven and have dysfunctional families that make them wary about marriage or what Sabrina calls ‘Fairy-tale version of love’.

I think I’d have liked more conversations between them that was not merely banter before we see them falling in love. The only close-to-profound encounter they have is when Matt takes her to visit his dysfunctional parents with an open marriage. We don’t see Sabrina talk about her mother and own issues. There’s allusions to ‘someday’ when Sabrina will open up to him about her mother. These allusions to a deeper connection is my main problem with the book. Because, it felt merely just an inch short of making the process of Matt and Sabrina falling in love more convincing. Sure, this book supplied what I wanted from it in doses. But it could’ve been so much more!