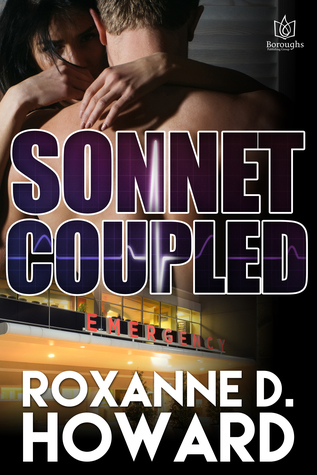 Sheltered and cosseted, Sonnet Mendoza abided by her papi’s wishes her whole life: no boys, studies first and always. Now an ER nurse in a busy Chicago hospital, medical school is so close Sonnet can taste it—just like her father always wanted. Just like she can taste all the things she wants, like Griffith Parker, the man of her dreams and her new housemate.

Working “graves” in a large hospital as a security guard while attending the police academy during the day doesn’t leave ex-Marine Griffith Parker any personal time, but after meeting the beautiful Sonnet Mendoza business as usual is anything but. Sassy, smart…and interested in him, too? Except, she’s made an art of keeping her distance, and she’s been clear that her plans don’t include him. But the heart wants what the heart wants. His wants Sonnet. He’ll put it on the line to win her.

This was a pretty fast read.

Sonnet and Griffith are both ambitious people who are serious about their respective careers. They also harbor a lot of pain. They are immensely attracted to each other right off the bat. But it takes a long time for them to proceed with their feelings, because the last thing they need is a relationship to distract them from their jobs. Not to mention, they are both in demanding professions, an aspiring doctor and an aspiring cop. But when they do finally act on their feelings, it’s as intense as it can get. That doesn’t mean the issues work themselves out, though. They still have to decide if they want to make it a serious relationship; or give up the rare connection they have with each other, for their careers.

There’s a LOT of detailed smut in this book, and quite well-written too. But I felt that the smut took away from the other important storylines worth exploring. I liked that these two take time to get to know each other before they jump to doing the dirty. But once the smut starts, it sorta takes the center stage

I liked the characters well enough. Sonnet struggles with loneliness after the recent death of her father which she still is recovering from; Ex-Marine Griffith still fresh from his trip to Iraq having been discharged just a couple of months ago. I personally feel that these issues could have been explored more. I liked subplots of their respective work problems what with a demanding boss, jealous colleagues and dodgy mates. I just hoped for a deeper look at the serious issues plaguing the main characters. I also wouldn’t have minded a dual POV of both the characters instead of just Sonnet.

It was a fast paced book and I never lost my attention. But the writing at parts felt a little forceful and didn’t flow smoothly as much as I’d have liked it to. But the story does work well as a steamy romance with great chemistry between the leads.